On February 19,1924, two hundred and forty loyal Newfield residents braved the cold, damp, winter, weather and traveled to Trenton by Special Train and petitioned the legislature for Incorporation of the village of Newfield as a Borough.

On February 27,1924 both houses of legislature voted in favor of the incorporation and Newfield officially separated from Franklin Township May 26, 1924.

A glass factory located in the “Y” between the Pennsylvania-Reading Seashore Line and the Atlantic City spur South of town. The First National Bank of Newfield opened on the East side of the Railroad at Catawba Avenue at a temporary location until the new building, which now houses the present Borough Hall, was built.

Sam William’s blacksmith shop was an important part of the early life in Newfield. Early post offices were in private homes or stores until located in a frame building on the site of the present one. Ed Vanaman was postmaster in 1924. Eugene Rambone served from July 1934 until he retired in 1972.

The town steadily grew in population due to the influence of the railroad and the junction of the Atlantic City Spur, which was a double track all the way to the shore. Numerous employees of the railroad settled here and the Railroad was a very busy, important part of the town with heavy passenger service and freight coming through every fifteen minutes and up to seventy-two trains through Newfield every day. 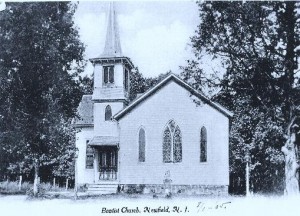 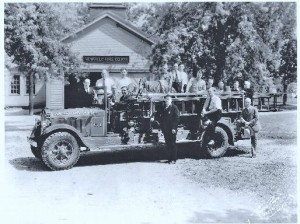 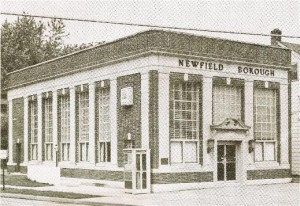 The Hotel and Stage Coach Stop, corner of Pearl and East Boulevard, was a busy place. People from all over the East coast came through and some stayed over night and proceeded to the shore points the following day.

A fire company was formed in 1908 and was housed in a small frame building on Catawba Avenue near Church Street. Later the Fire Company also went into the old school building and the tiny building became the first Library.

In 1914 Dick Dyer opened a Squab Farm (pigeons) which was the largest of its kind in the world, on Church Street.

The Rattan factory was the scene of a disastrous fire in the twenties and the Rug Mill burned to the ground in 1931. The fire company was not able to save either business with the equipment they had and they purchased the first mechanized vehicle, a Reo Fire Pumper in 1931.

The Newfield Municpial Water System went into service in the early thirties and Bueford Chew was the first water Superintendent, followed by Frank Rambone who served until his death on April 18,1970.

The First National Bank of Newfield was closed during the “great” depression of 29 and the 30‘s when President Roosevelt called for a moratorium on all the banks in the United States. It reopened in 1934 as the First National Bank in Newfield and remained at the corner of West Boulevard and Salem until 1970 when they built a fine new building on South West Boulevard. The Borough of Newfield purchased the old building.